“Collect and recycle all films used in the fields”

ERDE commits to taking back and recovering crop plastics

The initiative within the German Association for Plastic Packaging and Films (IK) known as ERDE (Erntekunststoffe Recycling Deutschland – crop plastics recycling in Germany) is undertaking to collect and recycle 65 per cent of all silage and stretch films marketed in Germany by 2022. The voluntary commitment was presented in Berlin during a parliamentary evening of the plastics processing industry on 26 June 2019 in Berlin. Dr. Regina Dube, Head of Water Management and Ressource Protection  accepted the voluntary commitment on behalf of the Federal Environment Ministry.

“The aim is collect and recycle all crop plastics in order to close the loop and avoid plastics escaping into the ground and the environment,” says ERDE Director and IK Managing Director Dr Jürgen Bruder, explaining the ambitious goals of the ERDE initiative. He goes on to say, “Manufacturers and distributors of agricultural films form the initiative’s backbone, as it is only their considerable financial commitment that makes it possible to recover the used films in a cost-effective way. It is a real example of extended product responsibility.” At the same time, extending recycling also reduces CO2 emissions. 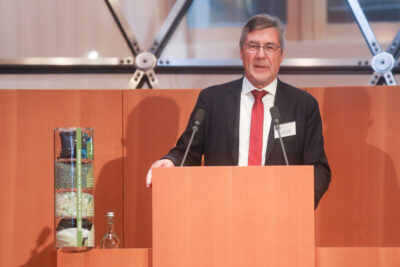 So far, ERDE has collected and recycled 25 per cent of silage and stretch films. Around 70 per cent of the agricultural films that are collected are recycled in Germany, with the remaining 30 per cent being recycled in other EU countries. The used films are turned into valuable raw materials for e.g. new agricultural and construction films, irrigation hoses and refuse sacks.

Next objective: integration of asparagus films, round bale netting and mulch films

The declared aim of the voluntary commitment is the inclusion of additional crop plastics in the collection and recovery system. While silage and stretch films account for the majority of applications – two-thirds in all – asparagus films, round bale netting and mulch films will also be integrated into the circular system in future. ERDE is thus seeking to establish a holistic recycling solution for all crop plastics.

The ERDE system is based on a large number of collection points set up by members of the agricultural traders’ and agricultural contractors’ associations in collaboration with system operator RIGK GmbH.

“The concept of return only works if manufacturers, distributors and farmers work closely together,” says Dr Henning Ehlers, President of the German Cooperatives’ Association in explanation of the motives for their support: “Our cooperative businesses share a commitment to the ERDE initiative, creating more and more collection points and thereby emphasising their understanding of the sustainable use of resources.”

Farmers and agricultural contractors make an active contribution to recycling by ensuring the clear separation of materials and preliminary cleaning.

The progress of the ERDE initiative is reviewed by an external body on an annual basis. New milestones will be established in cooperation with the Federal Environment Ministry in 2023

About the ERDE initiative:

ERDE operates under the umbrella of the IK Industrievereinigung Kunststoffverpackungen e.V. (German Association for Plastic Packaging and Films) and in collaboration with RIGK GmbH as system operator to organise the separate collection and recovery of agricultural films via collection partners. Agricultural contractors and farmers collect crop plastics and hand them in – brushed off and free from major soiling – to a collection point (www.erde-recycling.de). Recycling companies then process the collected materials into plastic recyclates for new plastic products.

The following manufacturers and distributors of crop plastics currently support the ERDE initiative: