Plastics are an important resource that must be recycled and not end up as environmental litter. In order to manage and optimise the flows of material specifically for this purpose, the volumes of material flows as well as leakage into the environment need to be known. Starting from this shared objective, six associations and organisations in the plastics value chain commissioned a pilot study to investigate global flows of plastics, including the handling of post-consumer plastic waste. The findings were published during the world’s leading trade show, K 2019.

“The Global Plastics Flow Study is the first of its kind to document facts and figures about the circular economy in 44 countries around the world in a uniform and comprehensive manner and to clearly identify traditional weaknesses in collecting and reusing waste,” said Dr Jürgen Bruder, General Manager of IK – German Association for Plastics Packaging and Films, and Project Manager for the study, explaining the unique contribution of the survey to the fight against environmental littering. “The volumes of waste escaping into the environment are dramatic and must be a wake-up call for the entire value chain. Waste management in all its forms must be the common goal of business leaders and politicians. The study’s findings clearly identify hot spots requiring urgent action to reduce unregulated waste management.” What is special about the study is that the findings were not generated from a helicopter perspective, but are the result of extensive regional surveys. The measures to be taken are as varied as the findings: while waste collection needs to be given priority in some regions of the world, Europe, for example, faces the challenge of expanding recycling and enforcing a ban on landfill.

The study was prepared by Conversio Market & Strategy GmbH in close cooperation with the associations of the Global Plastics Alliance and a large number of other institutions.

Core findings about material flows in 2018

The extensive study provides important numbers about the worldwide production of plastics, about how they are recycled, but also about how valuable, reusable materials are lost. The following core findings result at the global level: 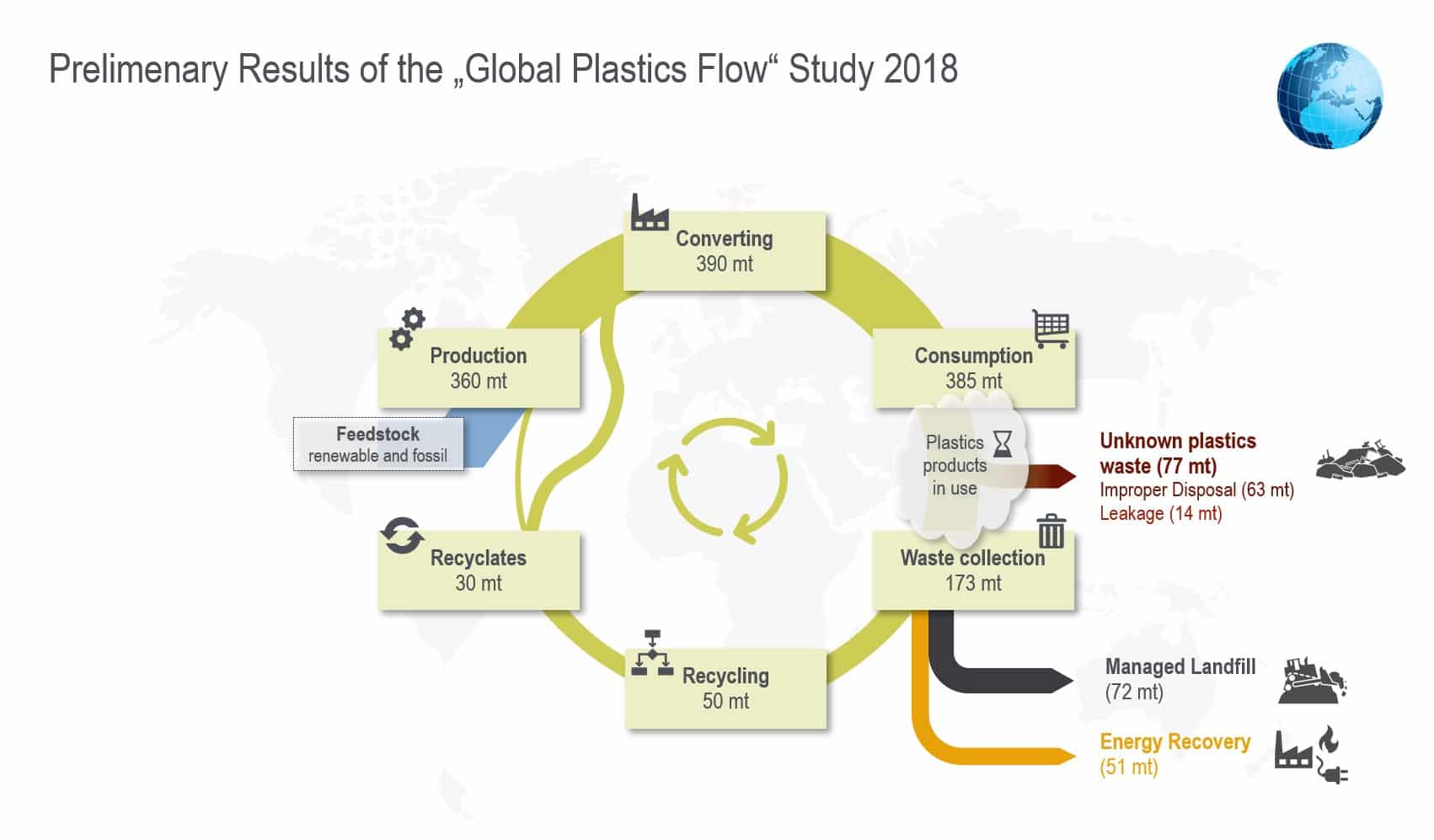 While closed cycles are defined in different ways around the world, there is a consensus among all the partners participating in the study that the collection, sorting and recycling of post-consumer waste made from plastics must be given absolute priority in order to drastically reduce materials littering the environment. Furthermore, care must be taken to ensure that no additional environmental littering occurs through the trade with waste.

The Global Plastics Flow Study is an important step towards capturing, processing and evaluating data concerning post-consumer plastic waste in a systematic structure. Furthermore, the participating associations and organisations in Germany and Europe want the study to provide a stimulus for a global discussion of measures to combat environmental littering. The study will thus contribute to the Global Information Project of the “Alliance to End Plastic Waste”, an open-source database especially for prioritizing investments in waste management.

At the same time, the study is intended to provide the basis for future investigations aimed at documenting progress in global waste management. This is also why a further aim of the organisations participating in the study is to involve other stakeholders and thereby in a first pass extend the breadth and depth of the existing data and verify them further.  For the latest data, it was possible to process information about plastics from production to disposal from 44 countries that together represent around 60% of the world’s population and around 80% of global GDP. The country- and continent-specific as well as global capture and analysis of data focuses on the following:

The summary of the study is available for download at: www.k-online.com/GPFStudy

Partners of the study 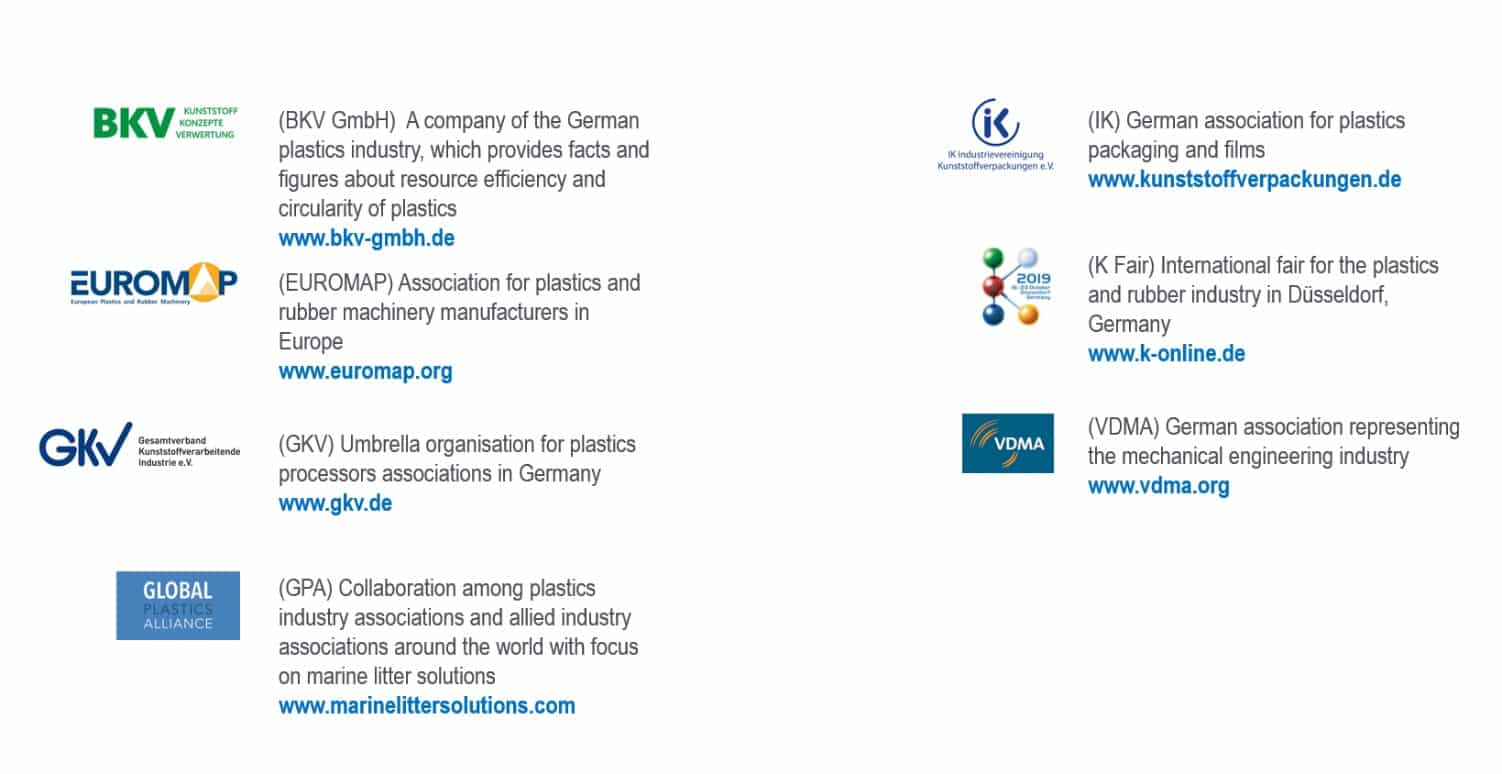