The Initiative “Erntekunststoffe Recycling Deutschland” (ERDE, or Crop Plastics Recycling Germany), the joint solution supported by environmentally-aware film and net producers in the IK Industrievereinigung Kunststoffverpackungen e. V. and the RIGK for recovering and recycling used crop plastics, will be taking back polypropylene baler twine nationwide from 2021, predominantly for mechanical recycling. With this expansion the ERDE portfolio of services will now cover all plastics generated in Germany in addition to packaging from livestock farming.

Boris Emmel, System Manager ERDE at RIGK, said: “To prepare this step we conducted pilot collections in different regions. The experience we gained shows us that there is great demand in the agricultural sector to take part in this convenient and reasonably priced recycling opportunity.” 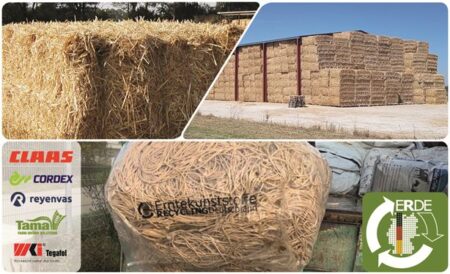 In addition to silo foils, stretch films, asparagus films and bale nets, polypropylene baler yarn has now been included among the plastic products used in agriculture that are collected by the initiative ERDE. © ERDE

There are a variety of producers and distributors of baler twine on the German market. Five of these companies decided to take concrete responsibility for their products and the environment as “pioneers” by making a financial contribution to the collection of baler twine as ERDE members. As a result, TAMA CE GmbH, CLAAS Vertriebsgesellschaft mbH and Reyenvas S.A from Spain have extended their ERDE membership to twine. The Polish company WKI Tegafol Sp. z o.o. and Cordex – Companhia Industrial Textil S.A. from Portugal recently joined the ERDE initiative.

Heiner Buschhoff, Head of Spare Parts Service at CLAAS Vertriebsgesellschaft mbH, said: “As one of the leading agricultural engineering producers worldwide, Claas is always one step ahead, and thus also in matters relating to conserving resources and climate protection. Claas is an active ERDE member itself, and now for baler twine as well. The company also purchases all crop plastics for its own brands 100% from ERDE members, and with this commitment ensures that all used crop plastics from Claas can go back into the feedstock cycle.”

Ewald Werschmann, Branch Manager at TAMA in Münster added: “As part of our commitment to the environment, accompanying our products throughout their life cycle is very important to us. As a matter of course this also includes systematic collection at the end of use to avoid polluting the environment, because as we all know, the plastic polypropylene, which the twine is made of, is a valuable feedstock for recycling. This is why as part of taking responsibility for our products it was self-evident that we would now extend our ERDE membership to twine as well.”

The 114 ERDE collection partners currently operate 530 collection points and organise many direct collections from farmers. This existing infrastructure will now also be used to collect baler twine from 2021. An app that can be downloaded from the ERDE website provides information about collection dates and locations quickly and simply. The Website  shows how to join ERDE. 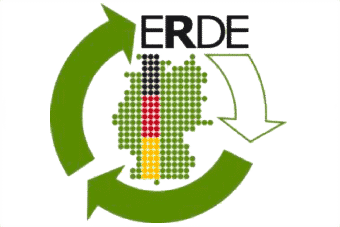 Under the umbrella of IK Industrievereinigung Kunststoffverpackungen e.V. and in cooperation with RIGK as the system operator, ERDE organises the separated recovery and recycling of used crop plastics, such as silo flat foils, stretch films, asparagus foils, bale nets and baler twine, through collection partners throughout Germany. Supply agencies and farmers collect the crop plastics, package and deliver them – swept clean and free of the worst of the dirt – to a collection point. The collection points set the collection prices. Recycling companies then process the collected goods into new plastic feedstocks.