The IK initiative ERDE (Erntekunststoffe Recycling Deutschland) will begin collecting perforated films nationwide starting this year. The films used in particular for the cultivation of special crops like strawberries, lettuce or early potatoes can be returned to the ERDE collection points in the relevant cultivation areas by the farmer. The collected film will be transferred into high-quality material recycling.

This was recently agreed by the suppliers of perforated film for the German market – RKW Agri from Germany and Sotrafa from Spain, ERDE management, and ERDE’s system operator RIGK GmbH.

Stefan Kwiatkista, Sales and Business Development Manager at film manufacturer RKW Agri Gmbh & Co.KG comments: “As a founding member of the IK-initiative ERDE, we strive for a sustainable end-of-life solution for all types of crop plastics in our product portfolio. We are pleased that we can now offer our perforated film customers an attractive disposal concept under the ERDE umbrella, which recovers the valuable raw materials via recycling.” 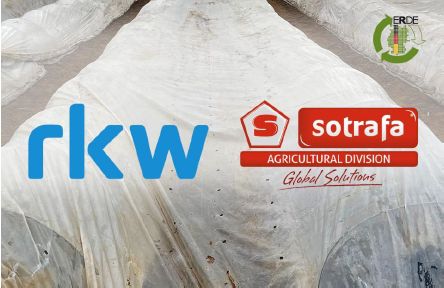 Perforated films, along with silage films, stretch films, bale nets, baler twine and asparagus film, are now among the plastic products used in agriculture that are collected by the ERDE initiative.. © ERDE

Farmers can drop off the pre-cleaned perforated films at the ERDE collection points listed on the ERDE homepage for perforated films, or alternatively order a mobile collection on site. The collection partner will inform about the disposal costs on request; these are significantly lower than the individual price for collection, logistics and recycling. ERDE collections are more cost-effective than energy recovery. This is made possible by the financial commitment of the two film manufacturers RKW and Sotrafa as part of their self-imposed and active producer responsibility.

Prior to the start of collection, Boris Emmel from RIGK refers to previously obtained test results: “In a pilot project in 2020, we were able to prove that the problem of sand and organic residues sticking to perforated films can be sufficiently solved via pre-cleaning by the farmer and post-cleaning by the recycler. Each type of agricultural film behaves differently in this regard, so preliminary studies are always necessary.”

ERDE is a system in which each individual in the chain can assume part of the overall responsibility for the environment and society: the producers of the films by financing the recovery system, the agricultural trade companies, machinery rings, contractors and disposal companies by distributing licensed ERDE products or providing collection points, and each individual farmer by specifically demanding ERDE products and deliver pre-cleaned films for collection.