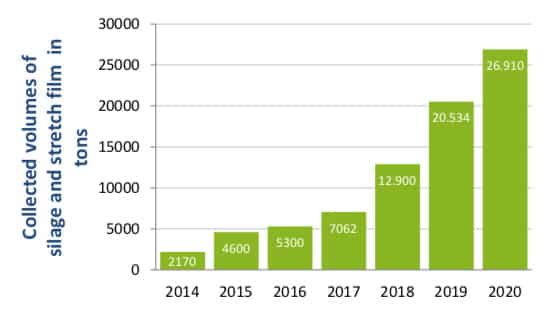 ERDE was able to significantly increase its collection volume last year – the amount of 26,910 tons of silage and stretch film is 31 percent higher than the collected volume in the previous year © ERDE 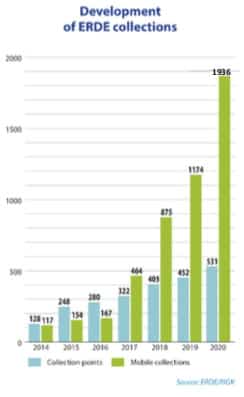 Once more, the IK initiative ERDE (Crop Plastics Recycling Germany) was able to significantly increase its collection volumes in 2020. At 543 fixed collection points and 1936 mobile collections, a total of 26,910 tons of agricultural films were collected and recycled. The amount corresponds to 51 percent of all silage and stretch film placed on the German market, this year’s report from the ERDE initiative to the German Federal Ministry for the Environment, Nature Conservation and Nuclear Safety (BMU) confirms.

Thus, ERDE fulfils a key point of the “Voluntary commitment to recover and recycle used agricultural film” handed over to the BMU in 2019. In this commitment, the ERDE initiative undertakes to recycle at least 50 percent of the silage and stretch film put on the market in Germany in 2020.

Franz-Josef Lichte, Managing Director of Trioworld GmbH, sees the achievement of the 50 percent mark as both a success and an obligation: “I am particularly pleased that we have achieved the 50 percent recovery and recycling rate for silage and stretch film specified in the voluntary commitment. This shows that modern agriculture and the use of agricultural plastics can be combined with environmental protection.

Silage and stretch films are important products that farmers use to ensure a sustainable and secure supply of feed for their livestock. It is important to keep the environmental impact as low as possible – and the ERDE system offers the solution. I am certain that we will achieve the recovery and recycling rate of 65 percent targeted for 2022.”

Rainer Schuler, President of the Bundesverband Agrarhandel, e.V., comments: “The recent report to the BMU shows that the ERDE system is a success story. Initiatives established by the industry itself can make a significant contribution to environmental protection and CO2 reduction.

Speaking for agricultural trade and distributors, we assume our share of responsibility in the system by providing and organizing collections for used agricultural plastics. And we’re still at the beginning: more products will be integrated into the system and collection volumes will continue to rise steadily in the coming years.” 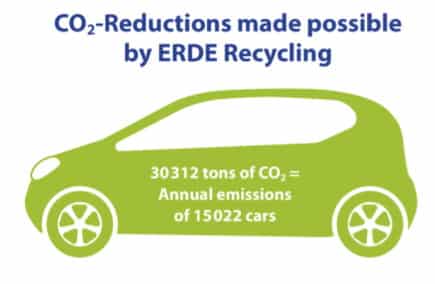 The IK-Initiative ERDE is a system for the return and recycling of used agricultural films, nets and yarns financed by environmentally conscious manufacturers of agricultural plastics in cooperation with RIGK GmbH. All collected film is sent for mechanical recycling within the EU. Last year, 55% of the recycled volumes was even processed within Germany. Calculating the CO2 reduction achieved by recycling the 26,910 metric tons of silage and stretch film, the CO2 equivalent is 30,312 metric tons – an amount around 2.2 million trees will be able to bind each year.

In addition to the agricultural films already collected and recycled, the ERDE initiative is also committed to include other agricultural plastics in the collections. These include bale nets, asparagus films, mulch films, baler twine and perforated films. Some agricultural plastics have already been successfully included in the collections: The report to the BMU mentions collection volumes of 488 tons of bale nets and 613 tons of asparagus films in 2020. Baler twine and perforated films have been collected since the beginning of 2021. Mulch films are to be integrated into the ERDE collection system in 2022. 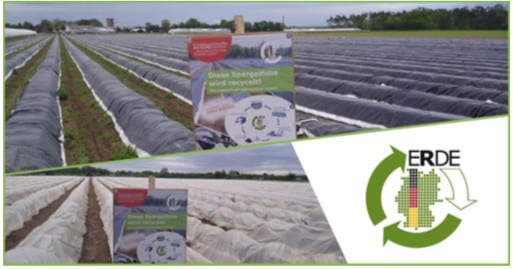 Used asparagus film inparticular, which is usually recycled after eight years, pose major challenges to recycling systems due to their high sand adhesion.

ERDE is involved in a research project of the Leibnitz Institute for Agricultural Engineering and Bioeconomics, which aims to mechanically clean asparagus films in the field. ERDE asparagus growers can educate about film collection and recycling through informative posters that have been distributed to over 100 fields nationwide. ERDE will continue to offer farmers and contractors a low-cost, nationwide drop-off option for their used agricultural plastics in 2021.

The ERDE app available for download on the ERDE website (http://www.erde-recycling.de) provides quick and uncomplicated information on collection dates and locations. Contributing to the ongoing success of the unique recovery concept for crop plastics is the increasing willingness of farmers to deliver their used products to the collection points roughly pre- cleaned and separated by fraction – thus benefiting from the ecological and financial advantages of the system.